Have you ever heard of Roger Bannister?  How about the story of the 4 Minute Mile?

For years, so many athletes had tried and failed to run a mile in less than four minutes that people made it out to be a physical impossibility. Could anybody run a 4 minute mile? Despite, or perhaps because of, the psychological mystique surrounding the four-minute barrier, several runners in the early 1950s dedicated themselves to being the first to cross into the three-minute zone. On May 6th 1954 Roger broke the 4 minute mile and the crowd erupted in celebration.

Since that time and up to this day over 20,000 people have run the 4 minute mile including High School kids.

When they got on the track, they knew it had been done. They had a NEW belief about this barrier and they knew in their heart that it was possible. 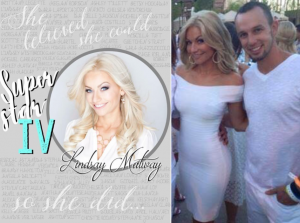 Lindsay Matway reminds me of this story. You see when i first reached out to her about my questions about joining Team Beachbody I thought she was already the highest rank in the company. She shared with me the vision of her team and where they were going to go. She shared how she left bartending and was working toward paying off the debt incurred when London was born prematurely. It connected with some thing deeply in my life and I knew that joining forces with her was my answer but I let fear hold me back for 8 more months.

I joined her team in April of 2011 which was a year after she started her journey. I was able to be a part of her first HUGE accomplishment of 15 Star Diamond and that was the first time I felt that she was “breaking the 4 minute mile”. She became the 7th ever Super Star Diamond in the company and did it in 22 Minutes.

But… That was just the beginning for her and the team over over 85,000 coaches that she leads today.

Yesterday we got to celebrate what is called Super Star Diamond 4. That means that she has achieved the rank of 15 Star diamond in her 1st, 2nd, 3rd, and 4th Business centers. In just 6 years time she has built 4 15 Star diamond teams.

What’s even more EMPOWERING than this is the fact that Lindsay was a LEAD to Beachbody. She called the company asking if they had a referral program for P90X and she was signed up as a coach and given as a lead and ended up without an upline and has built the entire team with no help from “above” and entirely with the amazing people that she has attracted into her life.

I’m excited to see how many of your leaders achieve things that they once felt impossible because you have broken yet another 4 Minute Mile.