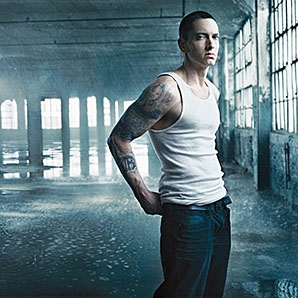 Eminem does Insanity- He boxed, he battled addiction, and ran like a hamster on a wheel until he found his fitness groove in front of the TV.

Eminem uses fitness to break his addictions.  I tell people all of the time how P90X, Body Beast, and these other Beachbody workouts were the way for me to put my energy into something healthy for my body.  I wanted to share this article about how Eminem does Insanity to help others know that may be facing addictions like I used to that doing these workouts can really help you break out of that cycle that you may be stuck in.

“I’m not sure exactly when I finally got it. In the early days, I just went with the flow: If I could hit a gym, I’d hit up a gym. If someone suggested a workout that seemed legit, I might try it, but it wasn’t a priority. Everything has to work around the music. Still, I wanted to stay fit even if I never wanted to get big. I worked out with Dre a few times, and I had to lift the kiddie weights. I’ve always been more into cardio, because when I’m performing I have to keep my wind up. It’s never cool to be out of breath — anywhere, doing anything — but especially onstage. So I ran and did regular sit-ups and push-ups. For a while I even got into boxing.

For close to a year, I worked with the late Emanuel Steward [who’d trained Thomas Hearns, Wladimir Klitschko, and others]. I wasn’t doing so hot at the time, drinking a lot and taking pills, and Emanuel offered to come out to the house to train me, to motivate me. What am I going to say — no? He was incredible. He taught me fundamentals, the mechanics of boxing. A lot of basic shit I thought I knew, I didn’t know. But I wasn’t that motivated; I wasn’t taking it too seriously. Once I got sober, that changed.

Recovery = Running
In 2007, I overdosed on pills, and I went into the hospital. I was close to 230 pounds. I’m not sure how I got so big, but I have ideas. The coating on the Vicodin and the Valium I’d been taking for years leaves a hole in your stomach, so to avoid a stomachache, I was constantly eating — and eating badly.

When I got out of rehab, I needed to lose weight, but I also needed to figure out a way to function sober. Unless I was blitzed out of my mind, I had trouble sleeping. So I started running. It gave me a natural endorphin high, but it also helped me sleep, so it was perfect. It’s easy to understand how people replace addiction with exercise. One addiction for another but one that’s good for them. I got an addict’s brain, and when it came to running, I think I got a little carried away. I became a f*&^^% hamster. Seventeen miles a day on a treadmill. I would get up in the morning, and before I went to the studio, I would run eight and a half miles in about an hour. Then I’d come home and run another eight and a half. I started getting OCD about the calories, making sure I burned 2,000 every day. In the end I got down to about 149 pounds. I ran to the point where I started to get injured. All the constant pounding from the running began to tear up my hip flexors.

Mixing It Up
So when I was starting to dial back on the treadmill, I tried out some of those workout DVDs you do at home. One of the first ones was Shaun T’s Insanity workout. I know a lot of these DVD guys are wacky, but I’m alone in my gym; I need someone on the TV yelling to motivate me. Besides, some of this s*^% is entertaining.

When I first started the Insanity workout, I alternated my routine, running one day and doing the Insanity the other. Then I stopped running altogether because it was too much to do them both. The Insanity won. After a while I started plateauing on that, so I mixed it up. I did the P90X for a little while (and I still do that ab workout because it’s the most challenging), but then I moved on to the Beast.

Now every morning before I go to the studio, I do the Body Beast workout with free weights, bench, and pullup bar at home. It’s just me, so it helps that the Body Beast dude is over-the-top. The routine is pretty intense, too. The first time I did the legs, I couldn’t walk for two days. Now I’m doing arms one day, chest the next day, legs the next, and I’m still functioning throughout the day. And I can finally do it without pausing the DVD.

I still hate pullups. They’re a mother*&**^, but I do them. I even fill out the log afterward. I guess I’m pretty compulsive working out. I feel like if I step away from it for too long, if I have a crazy week and take a five-day break, it’ll be like starting over. I’m afraid that if it goes beyond that, I might lose the motivation. Once you’re at a place where you’ve made progress and you’ve got some time invested in it, you don’t wanna quit and give up what you started.” —as told to Mark Healy 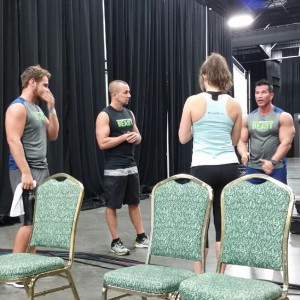