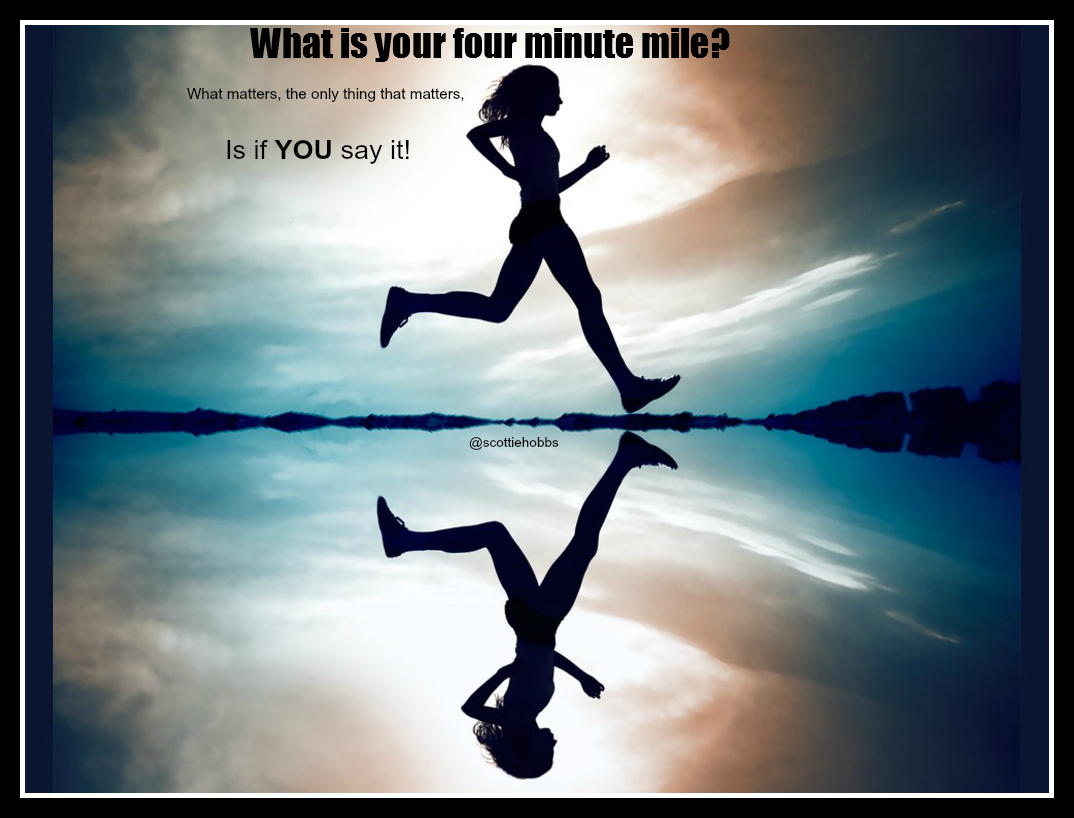 One of the biggest things that you have heard me say over and over again that will keep you from achieving your goals and dreams is the own belief that you bestow in yourself.  We are conditioned to believe that we will fail.  This is normal.  How many times is a child told ‘NO!”, ” Don’t do THAT!” From the time they are young they are told over and over the word no.  I wanted to share this story today after having a conversation with a very good friend of mine about getting in shape and lifting weights.  We talked about P90X and Body Beast as well as other programs that would be great for him to try.  The first things out of his mouth was, “I can’t do that.” I have also heard many people compare their results in fitness, business, or other aspects of their life with the results of others.   I am sharing the story of the four minute mile today to show you that you can do it.  The four minute mile is a story that inspires me daily to know that I can do anything I put my mind to and with that being said, so can you. 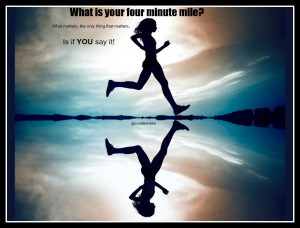 People had been trying to achieve it since the days of the Ancient Greeks.  In fact, folklore has it that the Greeks had lions chase the runners, thinking that would make them run faster.  They also tried drinking actual tigers milk.  Nothing they tried worked.  So they decided it was impossible for a person to run a mile in four minutes or less.  And for over a thousand years everyone believed it.  Our bone structure is all wrong.  Wind resistance is too great.  We have inadequate lung power.  There were a million reasons.

Then one man, one single human being, proved that the doctors, the trainers, the athletes, and the millions of runners before him who tried and failed, were all wrong.  And, miracle or miracles, the year after Rogers Bannister broke the four-minute mile, thirty seven other runners broke the four minute mile.  And a few years ago in a single race in New York, thirteen out of thirteen runners broke the four minute mile.  In other words, a few decades ago the runner who finished dead last in the New York race would have been regarded as having accomplished the impossible.

What happened?  There were no great breakthroughs in training.  No one discovered how to control wind resistance.  Human bone structure and physiology didn’t suddenly imprve.  But humans attitude did.  You can accomplish your goals if you set them.  Who says you are not tougher , smarter, harder working, more able than your competition?  It does not matter if they say you can’t do it.  What matters, the only thing that matters, is if YOU say it.

Are you READY to overcome the things holding you back?  If this resonates with you then feel free to CONTACT ME and let me know your goals.  I want to help you break the four-minute mile that you have in your life.

Click to join our team and get free nutrition, fitness, and life coaching