Do I have too much Pride?

Do I have too much Pride?

Story of Naaman and Leprosy

I was talking with my girls about obedience and making a difference with their lives through their daily actions and found this story in the bible a good way to share about it. How many of you have goals to make a HUGE impact but may be missing out on the opportunity because the small simple things that you are asked to do don’t seem GREAT enough to really make a difference? Do I have too much pride to go out and make a real difference in the lives of others?

So from what I understand, Naaman was a huge man of influence and so when he came down with Leprosy this was a big deal. Leprosy was an INCURABLE skin disease that led to disfigurement. Lepers were quarantined to die alone. This man of influence hears about Elisha, the prophet, and figures if there is a shot at being cured, this is it.

This is the point in his life that we begin to see that he has another problem that may be greater than Leprosy. It’s his PRIDE, from what I can read. It’s eating up his inside faster than the disease is consuming his flesh on the outside.

Naaman shows up at Elisha’s home with horses, chariots, servants, gold, silver, 10 sets of clothing, and gifts to give to the prophet for his service. Naaman is surprised when he is stopped at the door and I believe Naaman is thrown back at this thought and assuming that if Elisha hears that this great man with many gifts and influence is at the door he will be treated like a king.

Instead Elisha sent a messenger with some instructions.

“GO wash yourself seven times in the Jordan, and your flesh will be restored and you will be cleansed. 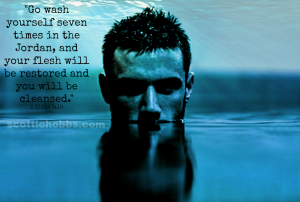 This is an INCURABLE disease. You would think he would be PUMPED at this news on how to rid himself of this disease but when he hears this news, he flies into a rage and I assume these could be his thoughts. “Dip myself in that FILTHY excuse of a river? I would of dipped myself in a river back home. There are much cleaner and purer water than this river for a man of great influence like myself.”

He was apparently willing to do ANYTHING to be cleansed except for dip himself in that river.

I believe though that he is much like many of us at times.

I believe that God doesn’t ask us to do certain things that we feel are below us because its a punishment but rather because he loves us. He does it to test our faith and obedience.

It’s when God asks us to do humbling things that we can recognize our pride. This great man is about to miss out on a miracle.

In this story Naaman is TOO great for his own well-being. As he storms away in anger from Elisha’s house, one of his servants asks this powerful question that I believe we can apply to many aspects of our lives.

If the prophet had told you to do some great thing, would you not have done it? How much more, then, when he tells you, “Wash and be cleansed”!

How many times have we missed out on opportunities to serve and love because we felt that it was insignificant or that it wouldn’t make a difference. I know this is a long shot but my challenge to you is to take DAILY note of the impact that each of your small decisions will make over the course of your lives. Not just for YOU but for the people that you will come in contact with. By small things will become great and make a difference.