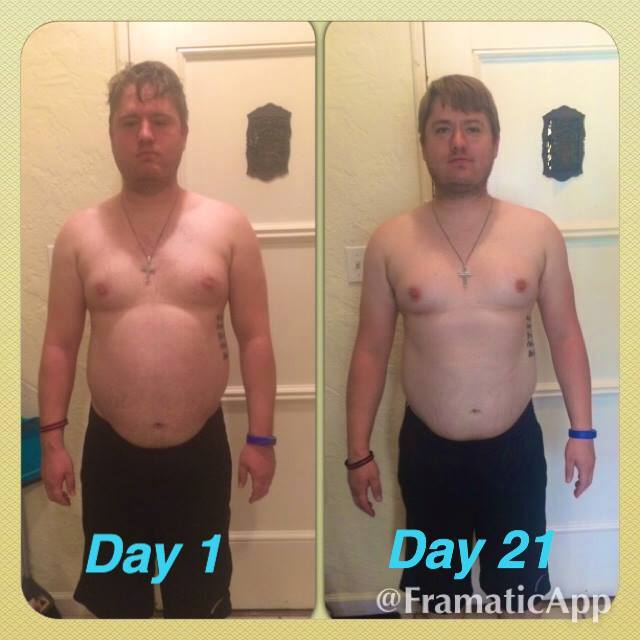 So what is Beachbody?  I think many people misunderstand Beachbody or don’t fully see the bigger picture.  You see, I hear people all the time with the response of “I run challenge groups”.  Is that all?  So what is Beachbody really? I run challenge groups but its just one small aspect.  When somebody asks me, ” Scottie, what do you do?”   My response is not I’m a health and fitness coach or I run Fitness challenges.  Its much more than that and I am here to tell you WHAT I do as well as give you an example of from a Facebook post of one of my friends today.  So let’s try this again.  “Scottie, What do you do?  What is Beachbody?”  Ahhhhh I’m SO excited that you asked me about it!  I help people learn how to use their experiences in life ( their story) to be able to connect with others and empower them to make changes in their lives.  I mentor people on how to build a business by being un- apologetically themselves. I search for and look for people that feel over worked, underpaid, and under-appreciated and I show them how to share their story to connect with others and help them build a business with awesome workouts like P90X, Insanity, and 21 Day Fix.  If I invited you to listen to a call with us as my special guest this Thursday, would you hop on?”

So below is a picture of my friend Ron.  This is the story that he told today on Facebook and I am PROUD of him for stepping outside of his comfort zone to do this.  This is what my life and passion is as a Team Beachbody Coach. 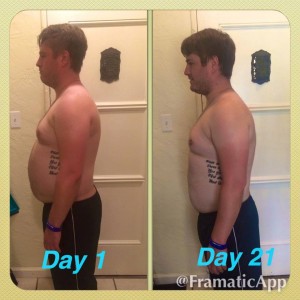 “Ok guys and gals. This is a very vulnerable post for me. I’m stepping extremely far out of my comfort zone here and all I ask is that it is respected. This is my story about where I came from and where I’m GOING! Ever since high school I have struggled with OCD and Depression. Normal things that most people took for granted everyday I would secretly have a hard time with. It first started with worrying about being dirty. I would wash my hands so much to the point during winter, my hands would crack and bleed. I could barely close them. The hand washing was constant and I still struggle today with it. Then it moved onto counting, then driving. I would get scared of hitting someone even though I knew it would not happen. I got so bad that I used to drive in circles. My family first had a real hard time understanding it. They would just say its all in my head, and to just brush it off. Well for ocd sufferers, you cant just brush it off. Thoughts and images stay in your mind. The harder you try to avoid it the worse it got. It then would move on to the intrusive part of ocd. The horrible thoughts that took over my mind and life. Deep down I knew I was a good person, and thought to myself why does this happen to me. I never partied, I didn’t drink or do drugs. I pushed through High School to graduate with honors. I would ask god constantly WHY. WHY are you doing this to me.
Flash forward a few years. After finally receiving the help that I desperately needed with medication, and therapy, I had finally started to feel like myself again. The worries came to a crawl, the hand washing diminished, I could drive normally. I met a girl at IBM. We started dating and things started to get better… things were good. But things were not great. There was still a void in my life. All the years of stressing out over my ocd, anxiety, and depression, I had turned to food for comfort. Throughout high school I was 140lbs, and couldn’t gain if I tried but as I got older the weight started to pile on. Anytime I would stress out I would eat. Yep I turned to food to fill that void in my life and it helped but only temporarily. In reality, it was doing more harm than good! It wasn’t till a few months into my new relationship I new I had to make a change. I knew that if this continued I would get diabetes, or have a heart attack before I hit 30. That’s when I found Beachbody. I saw a guy working out to these home workouts at my gym and he was extremely ripped. I’m talking six pack abs, huge bicepts, I’m not gay but he was a good looking man. I told myself why cant I look like that. So I ended up talking to him and started with a program called P90X. 3 months later I had lost a whopping 30 pounds!! I was so happy! I kept it off during my nearly 2 1/2 year relationship. Now Id like to say that this Cinderella story is over….Its not, not by a long shot.

Fast forward to two years later. My relationship has come to a close. Working, living, driving, and spending nearly 24 hours a day with her over the course of two years, we had started to resent each other. Long story short we went our separate ways. With the recent breakup and a short new relationship after, I decided to follow my dreams. I have always wanted to live in California. I visited it one time in 2003 as a graduation present from my parents and it was then I knew someday I would live there. So in May 2014 I decided to quit IBM, sell most my belongings, pack up my Corvette and head to Socal! It was the craziest and scariest thing I have ever done. I had no job lined up or place to live. I was free, just me and my pup driving across the country in a white corvette! Best time of my life!
Forward agin to 9 months ago. I found a job, and a place, both very mediocre to say the least. I loved socal so it didn’t bother me too much. However slowly and surely old habits started to creep up. I saw myself following my coworkers at the time, and was eating fast food, drinking soda, and lots of beer. IN & OUT Burger became my best friend! Before I could bat an eye I had shot up to a whopping 195! 10lbs more than I’ve ever weighed before. I yet again became depressed. Even though on meds, and seeing a doctor, I knew the only thing to get me out of this rut was Excersize. 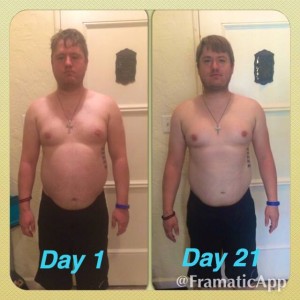 I currently live in a downtown area of socal in one of the major cities of LA county. I found a golds gym right down the street. I started going. Lost a few pounds but didn’t have the support or encouragement I used to get when I was doing p90x. I lost some weight but it was always a yoyo affect. It wasn’t until two months ago when I stumbled upon a post on facebook. It was about a guy I have seen a ton of times on youtube. His name is Scottie Hobbs. I decided to friend him, and went about my way. It wasn’t until a week later that I got a response. I had totally forgot about it. He had said “hey Ron my friends list is maxed out by facebook, but I see your a beachbody Coach. I said no I used to be for the discount but that was years ago. I told him I loved his posts ad how inspirational he was! He said thanks, and asked if I would like to give coaching another shot. I advised him that I was out of shape and wasn’t sure if I wanted to get back into the coaching aspect. He was very understanding, and said to contact him again when I was ready. I was able to become friends and followed his progress with his team. I was hooked! He was so happy, financially free. He fired his boss, and works full time from home making seven figures a year! I was stunned by his drive, and ambition. I told myself its time! Its time to give beachbody another shot! Its time to get your life in order, your finances in order, and body back into shape!!! This was my way to my goals and dreams.
This story is about failure, this story is about my failure. Thomas Watson the cofounder of IBM once said ” If you want to succeed you must double your rate of failure” Well I failed and failed again, but Im here to say that I am overcoming those failures and pushing myself everyday to be a better me. In less than a month I turned my beachbody dreams into a reality! Im now earning an extra income. I became and emerald coach in less than two weeks, and pushing everyday to help as many people as I can. Its not about the money although that a bonus. Its about changing lives across America. Is my weight loss journey done? NOPE not even close. To prove it heres my results in just 21 days. NO SIX PACK, MAN BOOBS, HIGH BODY FAT, but guess what its a start. A start to a long amazing journey.

Now Im inviting YOU to come with me on this journey. Its our time! Join me, follow me, follow your dreams. Do what makes you happy! I host challenge groups every month. I welcome all! God Bless!” -RON BERG

Want to learn a little more with no obligations?