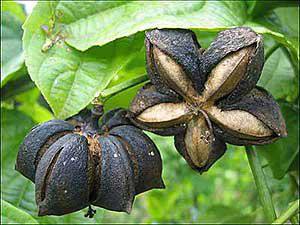 What is in Shakeology?  I get this question EVERY SINGLE DAY!  So I have decided to do a weekly Shakeology Spotlight of the ingredients.

This ingredient does SO much but one interesting facet is that it’s naturally rich in protein and fiber, so it’s a strong appetite controller—nature’s diet.  Then it goes a step further by helping to speed your metabolism, so you burn those fewer calories you’ve consumed more efficiently and rapidly.

“It turns out that Sacha Inchi (SI), also known as the Inca peanut, is a plant that produces star-shaped green fruits which yield edible seeds. The leaves of the plant, the seeds and their oil have been consumed for thousands of years by Indians living in the Peruvian Amazon and in surrounding areas. Because the seeds are a rich source of digestible protein (approximately 25-30%) and fat (up to 60%), they have been traditionally used to spur the growth of young children and keep senior tribe members in robust health.  There hasn’t been much modern scientific study on SI, but what little has been published appears promising, especially with regard to cardiovascular health.”

The seeds are a particularly abundant source of tryptophan, an amino acid that can help promote a positive mood.  The large percentage of omega-3 fatty acids (about 50%) also bodes well for supporting psychological wellness.  One of the key criteria to finding an optimal snack is how that food makes you feel.  It appears that Sacha Inchi seeds would do quite well in this department.

Another positive characteristic about SI seeds is that they’re high in fat (14 grams per ounce), rich in protein (9 grams per ounce) and loaded with fiber (6 grams per ounce). This is like a natural prescription for fast and efficient appetite relief. Nothing promotes stable blood sugar levels and hunger satisfaction better than foods that are rich in these three macro nutrients.

This seed is EXPENSIVE at about $7 for 3 ounces!  Shakeology cost only $4 per DAY and Sachi Inchi is only 1 of the 70 ingredients!